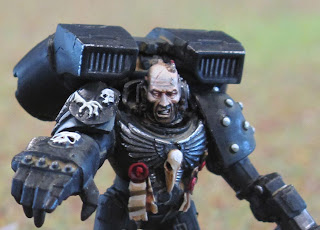 My lord, we have suffered bitter fighting on the planet of Caerdyth, but have emerged victorious with the minimum of casualties. Enclosed is a list of the deceased, the company is still at optimal strength and can last for some weeks without return to resupply.

We first met Ork resistance upon our arrival, which was unexpected as we believed the only threat to come from a renegade guard company.
We engaged the heretic green skins at dawn, utilising the cover of night to deploy from our thunder hawks, deep striking to the heart of the hoard, librarian Kalys taking the head of the green skin leader in the opening moments of the engagement. The battle was a massacre with the 8Th taking minimal casualties. We took key objectives and held off the remainder of the hoard until all were eliminated.

We moved South engaging the traitor guards men in the planets desert equatorial region. We deployed to the feild, to find a full tank compliant awaiting us, over confidence was our weakness however.
I deployed my squad along with squads, 'Lenore', 'Usher' and 'Rue Morgue' to disable the enemy armour with melta weaponry, the desert sand proved our undoing jamming many of the weapons as it did, we weathered the enemy fire until the weapons were cleaned and able to remove the two squads of Leman Russ tanks.
Librarian Kalys and squad 'Berenice' fared better against the guard entrenched in the regions manufactorium, quelling what little resistance they faced leaving our kill total considerably higher than any losses we took.