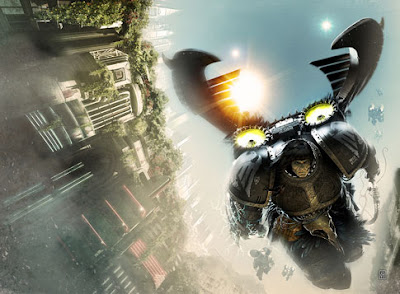 Before I begin proper let me just tell you a little story of my own. Saturday 5th March 2011 I attend Black Library live and see the above piece of artwork for the first time. I wanted the book then and no one could tell me when the book was due out other than late 2011 at the earliest. So patiently I waited and enjoyed Gav Thorpe's audio books and George Mann's waiting for more "raveny" goodness.

Then I get a text telling me that the book was available at the second October ToS so a few tats later its mine. 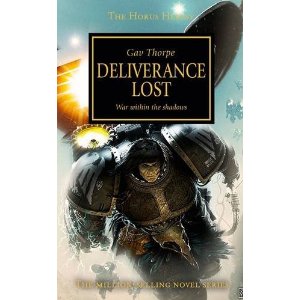 So to the book itself, the 18th book in the Horus Heresy series, we begin after the Istvaan V massacre, tying in with the "Raven's Flight" audio novel and unexpectedly the short story "The Face of Treachery" from "Age of Darkness". Now anyone that knows me in real life will know I haven't always been the biggest fan of Gav's writing but recently anything i viewed as an issue has gone, his writing seems more eloquent and has detail his earlier novels lack.


As you would expect the book contains the usual amount of tantalising information about the Heresy period we’ve previously not known (as much as I want to share I will try to keep spoilers to a minimum) about the Primarchs, the Raven Guard and the Alpha Legion. The sections dealing with the Alpha legion seem a little at odds with some of the  information n “Legion” but due to the nature of the Heresy writing team I assume any slight changes (and they are minor) have been approved by Dan Abnett. The book also contains more interaction with the Emperor than we’ve really seen before but like any other glimpses we’ve seen Gav keeps it vague, well most of it (won’t tell you about what Corax is sent to find, but its good).
One of the most stand out sections for me as a Ravens fan (besides the things I really want to tell you.) is the description of Delieverance as Corax comes into land, stating that he’s kept the moon the same since his slave revolt. It’s nice to see one of the more over looked Primarch’s given a little more personality; it gives me hope for those I’ve always viewed as dull such as the Khan and Guilliman. We also get an insight into the uprising on Deliverance and Corax's past (including his first name, think Latin for Raven if your stuck) but the interaction between the Primarch and his legion is a really interesting dynamic especially the before and after of the Astartes becoming legionaries.

Overall I thoroughly enjoyed the book,  (though I am a little biased due to my love of all things Raven) though surprisingly it was the Alpha Legion I really enjoyed especially Alpharius (no not that one) and Omegron's (yes that one) slow subversion of a world is amazing. I am now looking forward to Gav's next Heresy book and George Mann's Raven novel.
I'm giving the book 4 Raven's out of 5, whilst good it still lacks a little something that Heresy novels like "Legion", "First Heretic" and "Fulgrim" have.

I hope you enjoyed AMOR's first book review I had some good feedback from the Kill team review so I may do a few more.

The book is available here
Posted by Citizenwilliams at 10:10