So ok I lied, real life caught up to me last night, but finally we have the last game of doubles. with 2 loses a win and a dra under our belts, A.D. and I had no idea how this last game would go. We met Dan and Matt (cheers for putting your name on the list guys) on a corner table surrounded by several players not happy about being on the middle tables. The four of us were all pretty relaxed, turned out they had a fun weekend to so we all vowed to make this games a good one to top off the weekend.

This game started like many others with people looking at the guard element of the list and freaking out, they depoloyed second and there was much dbate about my corner bunker, this increased when A.D. once set up his screen infront on my troops.Their responce was to bunker in an opposite corner and hide their two daemon princes bhind a bastion.

A note about the mission, as the weekend was the 25th anniversay of 40k the final mission was down as "Cleanse" the old table quarters mission. Our opponents had clearly played this misson more. 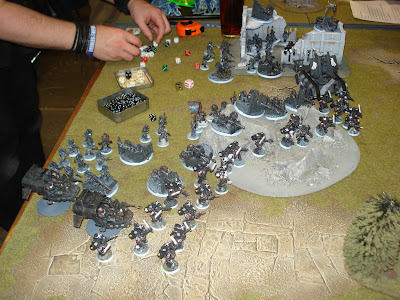 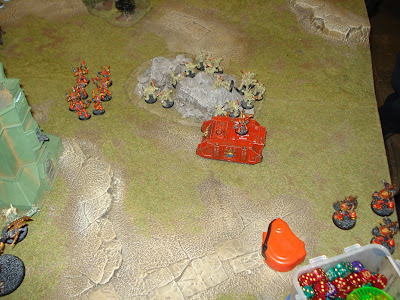 So the game began with the speeders swooping forward to deal with the closet unit of bezerkers, A.D. and I decided that eliminating the close combat threat would allow us to deal with the high toughness models at our leisure. 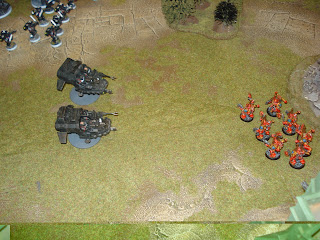 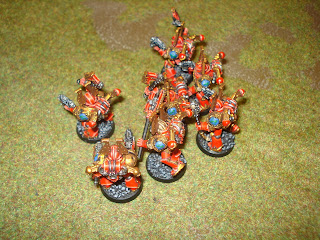 The long range fire whittled down a few bezerkers, and the rhinos but A.D.s attempt at moving the Raven's out of terran (placed there for a lovely cover save from the obliterators) decided to jump them not walk them, resulting in a 1 for the sanguinary priest, who promptly failed his feel no pain roll. (I was not happy). 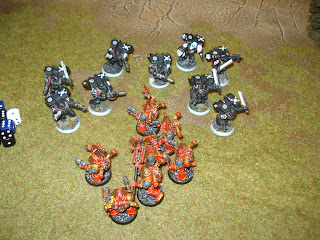 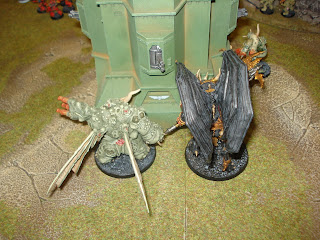 As an avid chaor player GMort disliked that who paragons of the dark gods hid for 3 turns. 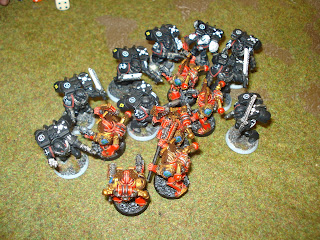 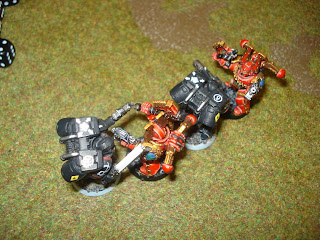 So back to the report, after a few combats the ravnes were running low but so were the bezerkers, our opponents held 2 table quarters to our 1 with the fourth empty. I began to shuffle a few squads toward to open quarter. 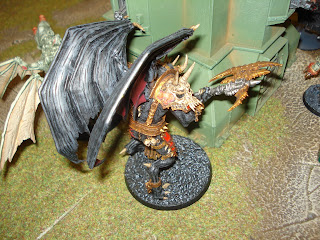 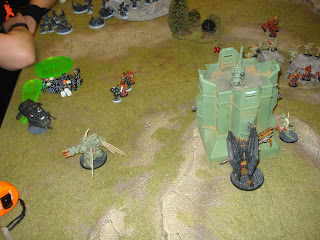 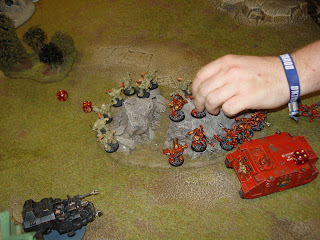 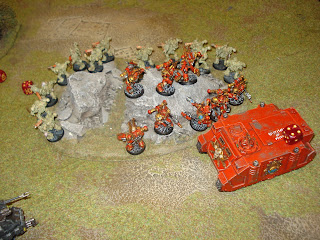 The immobilised rhino spat the second squad of bezerkers into the same wood as the plague marines, where both would stay and vex my long range shooting for the rest of the game. 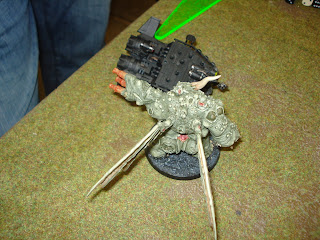 Our finest moment of the game, A.D. sent a speeder to harass a Daemon prince, the prince fell for it and moved out of cover, this allowed my guard to call a bring it down order (well 3) and drop that plague infested fiend. 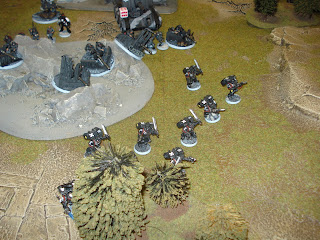 The remaining Ravens move to the "woods of death" 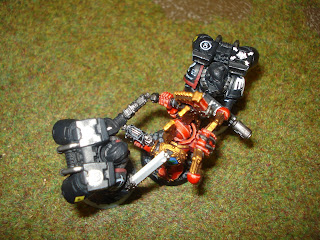 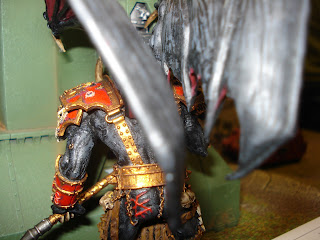 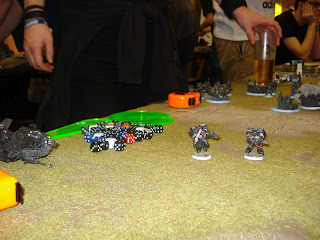 side note... this picture shows me... well my crotch with a pint, 2 seconds later there is no pint as the man next to me knocked it over, all over my models and codex etc. not only did he take several seconds to apologise, I was down a pint. If this man reads my blog (unlikly I know), then sir you owe me a pint of bugmans! 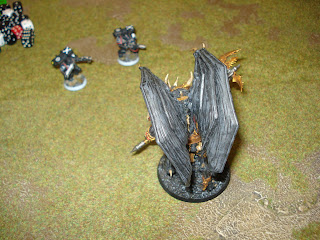 The two remaining Ravens in the bezerker combat win and tempt out the other daemon price, another round of auto cannons and he dies too. 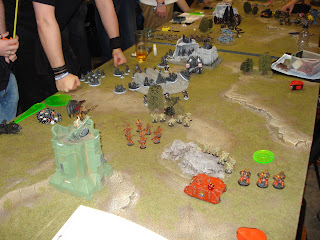 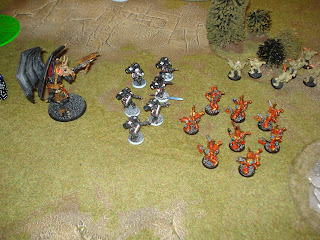 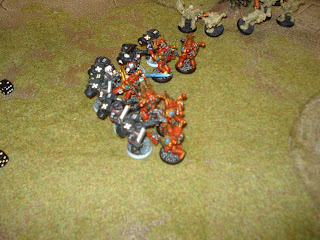 The final Ravens squad charge the second unit of Bezerkers, it ends badly. 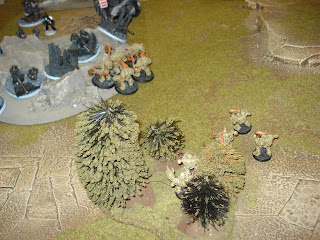 Turn 5, the unit of termies finally arrive and have no targets but my command squad in the previously vacant 4th quarter. they weather the fire leaving on left, the lieutenant that gets all the long range shooting until turn 7. 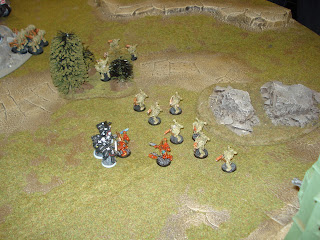 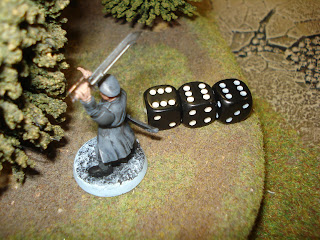 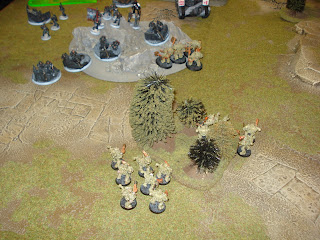 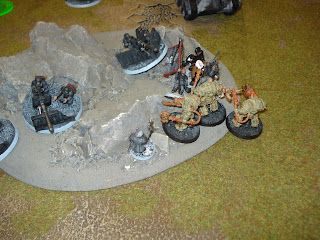 The korne element was eliminated, but las guns have a hard time hurting nurgle especially when it has a 2+ save. the game finished 3 -1 narrowly the final 3 turns had quarters changing hands in every phase.

A great game with in our eyes what was the closest to a doubles lit we played all day. I think we have these guys a best games vote as well as the cornish boys but I'm not sure.

Coming up hopefully this week I have my overview of doubles and why ToS sucks in comparison and a little look at black library live, my favourite WHW event.

Also if you like my stuff give the blog a like on FB, I post updates on their for your convenince and I will honestly do something stupid if we get 25 likes. TTFN
Posted by Citizenwilliams at 15:37