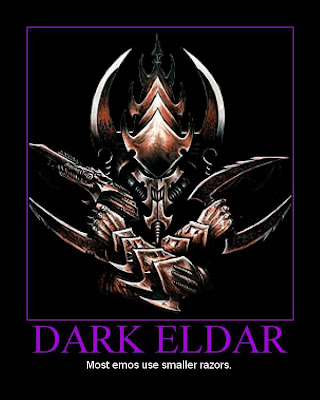 So on to game two, we met up with two burly fellows from the west country (team - Victory tastes better with bacon, again sorry I can't remember names). We were presented with the following. 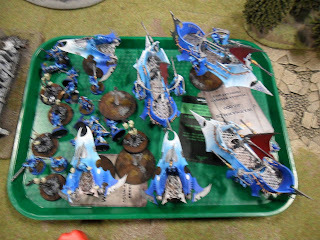 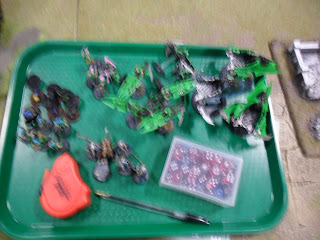 I forgot to photograph the lists to this may not be 100% accurate.

1) Knowing we would be out manouvered we deployed in a clump (see below) with some pretty decent fire arcs.
2) Our opponents were great guys (a mirror or A.D. and I) but seemed reluctant to get close to use, odd with a combat heavy D-Eldar army.
3) A.D.'s charge into vect and 4 incubbi... this was a short lived combat.
4) Our combined efforts that grounded ALL the venoms by turn 2 leaving us chance to pick off the rest (despite this, it was such a close game)
5) 3 turns of 3 ravagers firing 3 dark lances each at my medusa, and doing nothing. However another theme for the weekend, the Medusa won;t die, but it won't kill either.

Unlike ToS you get two best sportsmanship votes for the weekend, one each. A.D. and I could have given any of our opponents one or two with a smile, but this game was so brutal and close and funny these guys had to get one.