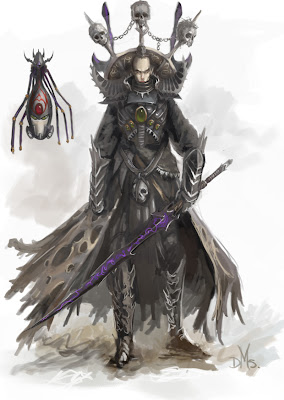 So on to game 3. We looked at the board after the break and a few beers, "Dark Eldar Death Dealers". We had a pretty good idea what we were against. We arrived at the table to find to genial fellows (Ben and again the name escapes me I'm sorry).

After a quick review of the terrain and our lists, we set up. The mission called for several roaming objectives that stopped once you touched it. This meant every ones just deployed on or near objectives.

We went second and thats when the pictures stopped. Their list (see below) worked in a similar way to the previous game but they showed no level of intimidation about or list. 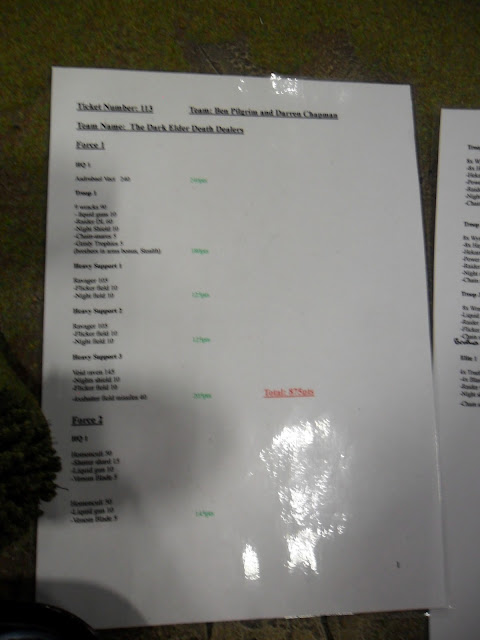 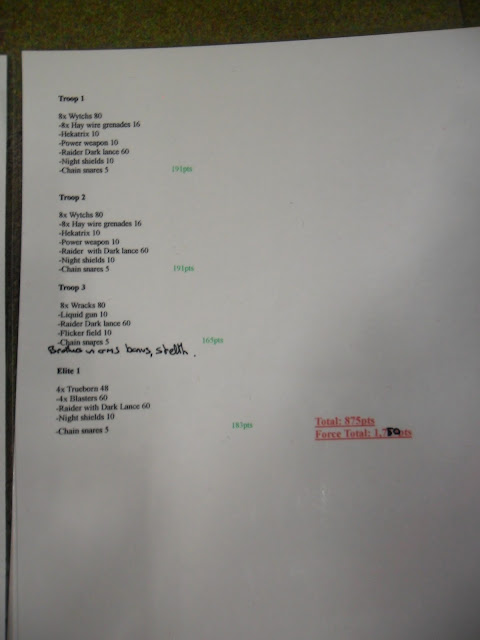 After the wychs sped into my guard fire base and the Ravens were butchered by Vect, we were in serious trouble. The game was a really fun with little moment filling it, but ultimately we were utterly outclassed and any time I left the table I came back to more dead things.

I wanted to hate this game, but the guys were great, I got loads of tactial info and a free beer. We sat and had a meal with the guys afterwards.

Not too much to say about the game really as I can remember little except blind panic. The next two games Gmort photographed for me so the reports will be more in depth. Now for a sideline.


So normally at a tournament (that I'm playing in or helping out friends) there are a few amazing games like the ones we had at doubles, where you click with the guy (or gal) you're playing and win or lose it a great time. However, there are some games I've had (see the 9 turn game from October Gt) that aren't so fun.

The internet is full of rants about TGF's and bad sportsmanship, so I don't want to do a full one of those we've all had them. Doubles however, even on the higher tables seemed more relaxed, there were still competative lists and player but due to having a friend and the oponent hopefully bringing someone nicer, everything is just better.


So more tomorrow, next battle report if I can get the pics, failing that it'll be my plans for next doubles, which are coming along nicely.