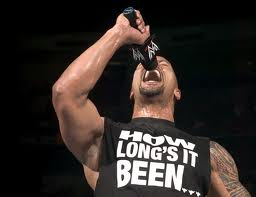 Ok I know it's been another week, but I have been working on things my net has been down so there should be a steady stream of nerddom and painting hitting you this week, assuming my router holds out in its gaffer taped coffin.

This article will be my first attempt at a full battle report.

A few thank yous before I launch into the whole pic and blow by blow thing. Thanks to Craig Martin (my opponent) and Brendan Hall and GW Sutton Coldfield (For allowing me to take the pics)

The mission we rolled was Seize Ground with a Pitched battle deployment. I used my Librarian Ravens list.

Craig rolled to go first so began his set up. (As of atm i don't have his list, will post it when i have it) 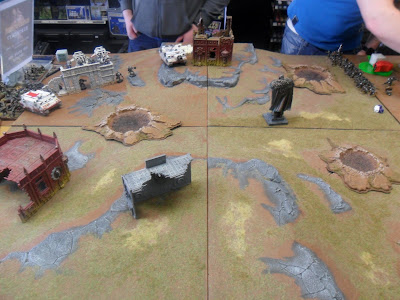 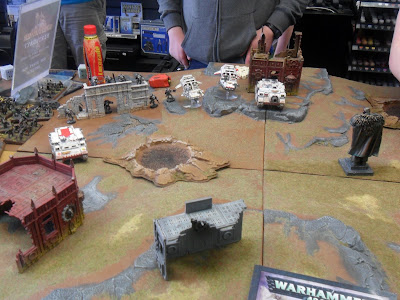 As is my usual way with the Ravens I opted to deep strike in. So Craig got 2 'free' turns as it were. He out-flanked his first bike squad awaiting the Ravens arrival. 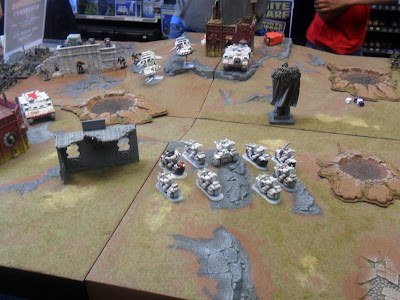 Unfortunately the game was a little uneventful until my turn two. (only one army being on the table and all) Then the Ravens arrived. 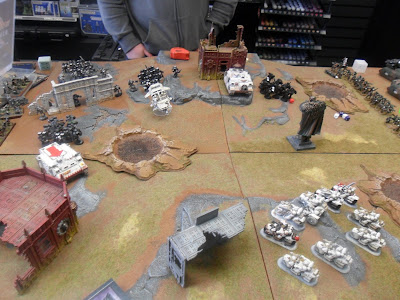 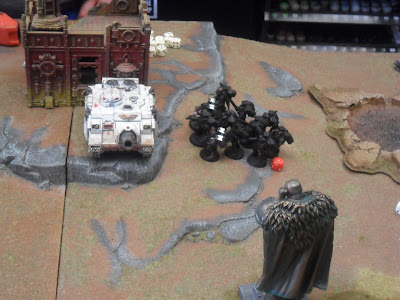 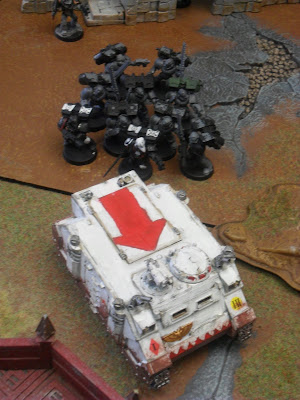 Around half the Ravens appeared with my librarian and honour guard conspicuous by there absence. I fired melta shots at all his tanks, removing the demolisher's cannon and shaking the rhinos (not my best shooting ever) Craig then got chance to counter attack. 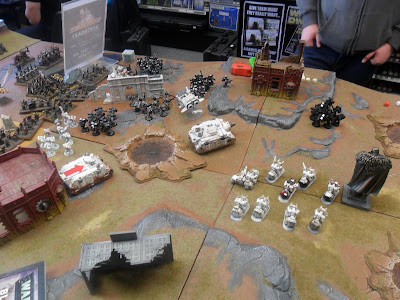 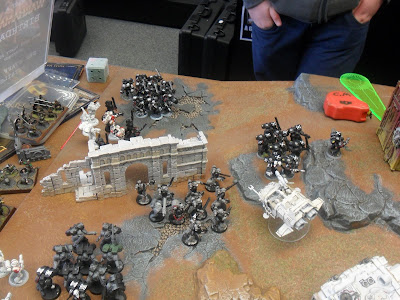 A White scars assault squad dropped down, however Korsaro Khan chose to bide his time also, so after weathering alot of bolter fire, however only losing one Raven it was time for combat.

Craig didn't fare to well in the combat all three went my way with half of each of his squads in combat being eliminated to only a few Raven casualties. 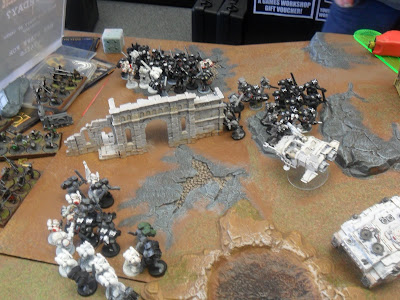 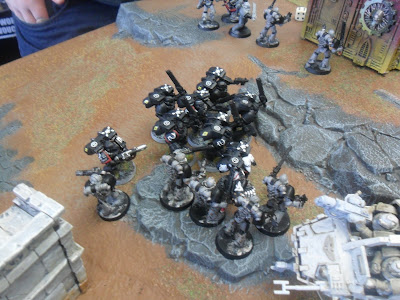 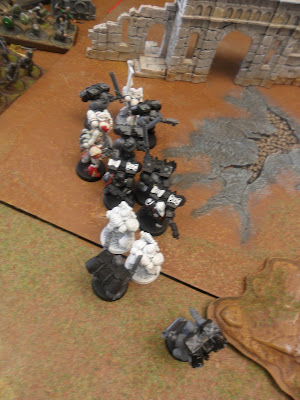 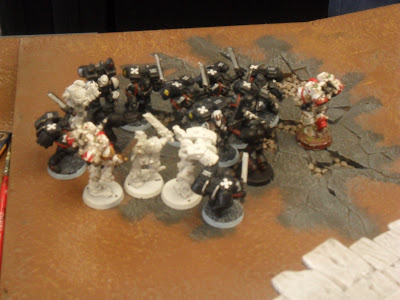 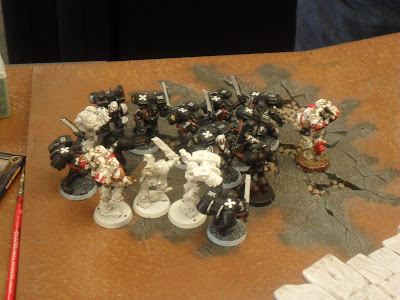 The Battle field at the end of combat. 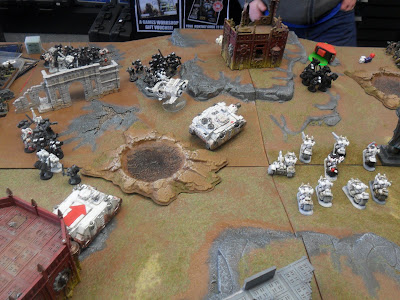 My turn three, the rest of the Ravens arrive. 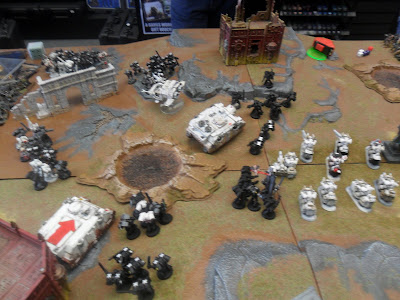 My librarian lands and decides smite is the power of the moment, the dice gods decided otherwise. :( However his melta/ flamer armed compatriots delt with several of the awkwardly high toughness bikers.

After a shooting phase of more meltaing and tanks dying this time, combat ensued once more, while the Ravens fared less well and lost several battle brothers once more the White Scars came off worse. 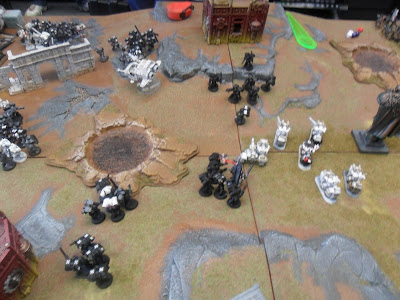 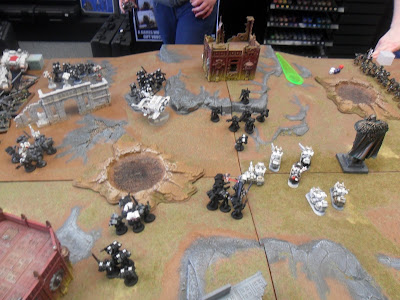 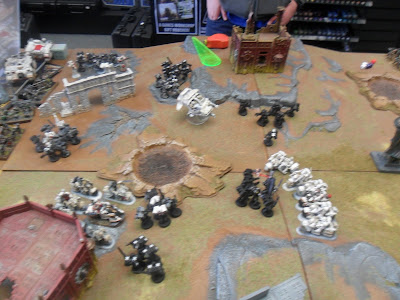 My combat celebraton was short lived as Korsarro arrived with his squad and rode full pelt towards an assault squad. Khan destroyed many of the Ravens before he hit and ran (though he made a habit of hitting and running, mainliy the running in this battle). 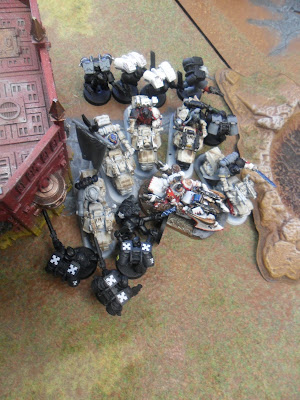 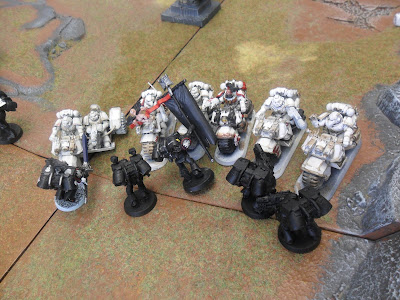 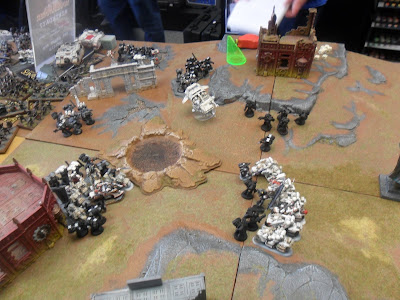 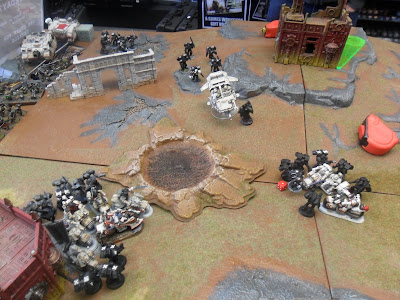 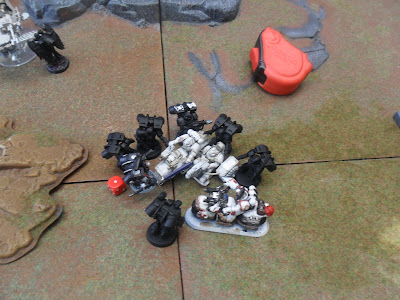 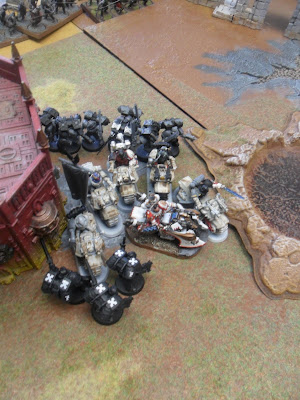 Else where on the battle field the Ravens fared better, clearing out any further resistenace offered by the White Scars infantry and slowly advancing to mop up the remaining bikers (and the ever and constantly elusive landspeeder). 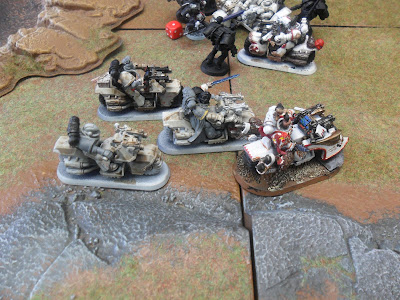 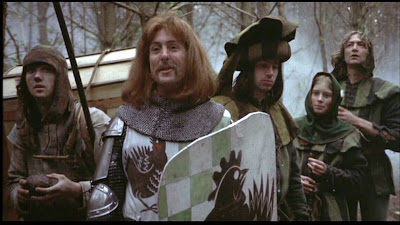 After he bravely ran away, Korsarro aimed straight for my librarian, gunning down one of his fellows and then felling the psyker in the combat phase, before promptly running once more. 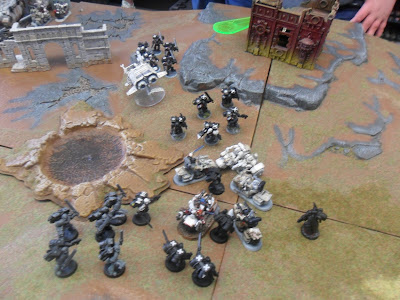 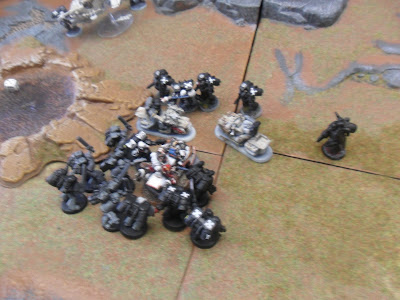 The last move of the game was EVERY SINGLE remianing Raven Guard charging Khan and the last two bikes... When the dust cleared and the chain swords stopped revving, the White Scar had fallen. 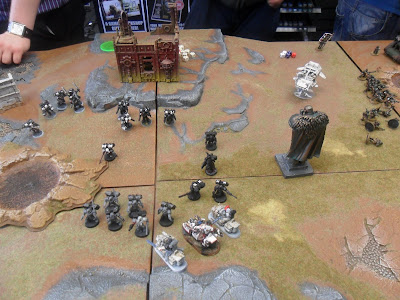 I think it was 9 kill points to me and 5 to craig, though the final result doesn't give justice to how close it really was.

Ok not my best article and I've learnt alot about battle reporting, like take notes!! Will try to do a better one soon.
Posted by Citizenwilliams at 12:15