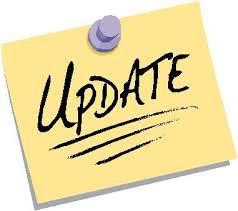 So it's been a couple of weeks due to real life but you don't want to hear about that. I know I don't do many project updates on the blog any more but its half term (so working in a school I have a week off as well as he kids) so I figured I'd start by documenting my week of geek.
Never fear any fans of my regular series, both will be appearing in their usual slots (MOAB on Saturday and Games for Kids on Thursday) but also there will be daily updates on new board games I've been playing, painting I've got done and anything nerdy that takes my fancy to have a rant about. This is mostly in an attempt to diversify what I'm writing about, I love Malifaux but it's beginning to dominate my life a little so I want to show that there's more out there.

However all this start tomorrow So for now you can see the little hobby I've managed to do since my disappearance.

So while not the most exciting thing ever I picked up some of Revell's snap together Star Wars models while  was working to break up my evenings. While a little bit fiddly in places they're great kits especially as their so cheap. While I am considering repainting them When I get time they look pretty good as they are for now. 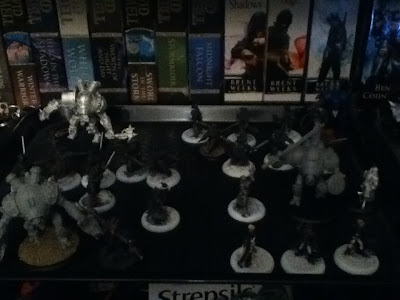 This little collection is about two thirds of my Warmachine collection. I have never taken the game too seriously unlike many at my FLGS but i do really like it and as there's a local tournament coming up I designed this 50 point list to play in it. This is some of the stuff you'll see getting painting (or finished painted) over the week. 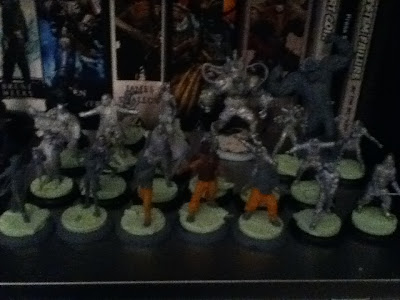 I LOVE Batman, no really. But more specifically I love the Joker. So when A few months ago I found out Knight models were releasing a miniatures game based on Batman: Arkham City I placed a standing order with my FLGS for well "One whole Batman" so this is what the range stand at for now, but last night the rules were released so The biggest part of this weeks plan is to get my joker crew up and running to test it out. The rules look pretty solid and are very close to Pulp City for any who have played that system but with added BAT.
There was also going to be a picture of my finished batman model but it came out too dark (stupid phone) so He'll be in one of this weeks updates.
Until tomorrow then dear readers, stay nerdy.