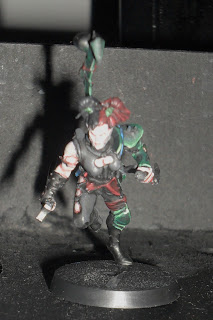 So with a few days off of late I've been hitting the hobby pretty hard, and have managed to scrounge up 3 raiders from friends to complete my Dark Eldar 1750.

After the practise games last week and a few more at the weekend I decided I really liked my wyches and wanted to use them in the 1750 list, so another list change occurred.

I played 3 games yesterday.
Game 1 was against a guard flying circus, my opponent missed every shot in the opening turn (due to night fight) and things were looking good. My opponent fell for a little trick and I was racing to his gun line, unfortunately Valkyries pump out a lot of fire power and my opponent realised he could out manoeuvre me and still end a unit a turn. The game finished 1 objective to none with only Sliscus surviving.

Game 2 was against the infamous GMort and his new counts as blood angels. As we arrayed our armies across from each other it became clear that if he killed enough of my force turn 1 I was sunk but if not I could charge in my turn on and change the face of the game. at the end of Gmorts turn 1 a raider and the venom were down and my army surged forwards ready to take the fight to the Astartes. They then proceeded to do jack all and Gmort simply reversed and gunned me down. at the end of the game again only Sliscus (and only because it was funny) was the only model standing.

Game 3 was against a Salamanders “battle force” army that deployed in a reinforced building so I attempted to deploy much of my force outside the range of his long range weapons to hopefully speed forward and assault. However the land raider full of terminators and Vulkan proved a problem as did the thunder fire cannon that managed to take out a squad every turn it fire until I at last disabled it. Another loss but again Sliscus was the only model to survive.

The games taught me a few things;

1) How to position and use my raiders.
2) Dark Lances are not reliable ways of killing tanks.
3) Sliscus is a utility character fiend.
4) Strengh 6 weapons will always kill Lelith before she can reach combat.
5) Incubi are nails, but runaway a lot (I really miss, the “and they shall know no fear” rule).
6) Wyches will dodge a dreadnought for 9 rounds of combat before they decide to kill it.

All in all I enjoy the army but it does need some tweaks, I’m going to try the list with Drahzar in it instead of Lelith as he appears a little more survivable.
Posted by Citizenwilliams at 12:57