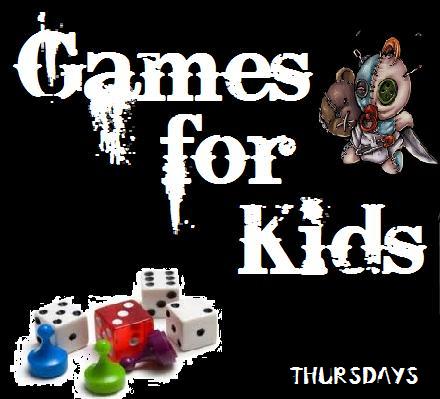 It’s been hard to sit my siblings down for a game of anything of late but we found ourselves waiting for my parents to return home one night so I jumped on the chance to demonstrate on of my favourite casual card games to them.

Fluxx is a card game designed by a group of mathematicians in which the rules, goals and cards you play with constantly change. Confused? I shall explain.


The core edition of Fluxx starts out with just two basic rules; these are on a card placed in the centre of the table at the start of the game: each player draws one card off the deck, and plays one card during his turn. 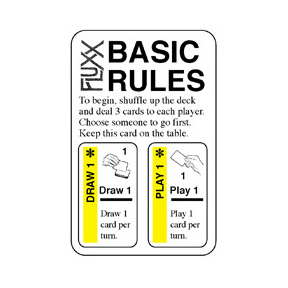 The deck its self contains four types of cards in the core game: New Rule, Action, Keeper and Goal cards: 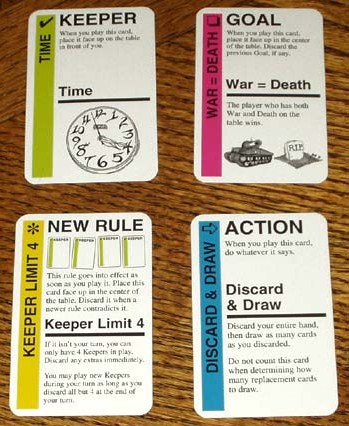 There are many other versions of Fluxx with additional card types and some where the cards have sub-rules included on them. We did not play one of these version we played old school.
I explained the rules to my sisters and they seemed pretty happy with them and began the first turn. Things went smoothly but as always happens with Fluxx soon we were drawing 5 cards a turn and playing our whole hand. My sister managed on about turn 8 to pull out the keepers “Bread” and “Toaster” with the goal “Toast” (which you will not be surprised takes both these keepers) smugly she placed the cards down and the game was over, after about 5 minutes.

N.B. this is worth mentioning actually, on the box for Fluxx its self it states play time as 2 minutes to 30 minutes. The two minutes is conservative I’ve seen players win in turn 1. This is part of what makes it fun and an amazing pub game (even with the kids, keeps them quite).

We proceeded to play a few more quick games and they both understood the game really well. My youngest sister struggled with some of the one shot Action cards as she wasn’t quite sure when to play them and often ended up having to show me her hand and ask if any were appropriate but other than these she said she really enjoyed it and my other sister has borrowed my “Star Fluxx” (Flux in space) to play in quiet moments at school (which is impressive for a teenage “One Direction” fan). So overall Fluxx has the child seal of approval.
Posted by Citizenwilliams at 09:00